Men increasingly want laser hair removal to improve their appearance and increase their self-confidence. Athletes are a particular group of men who use laser hair removal to enhance their performance or to allow taping of areas of the body to prevent injuries. Others, such as bodybuilders and gymnasts, choose to remove hair, so their physique appears more defined. Some men are advised to look at long-term hair removal for medical reasons such as pseudofolliculitis barbae or pilonidal cysts to prevent the hair follicles from becoming inflamed. 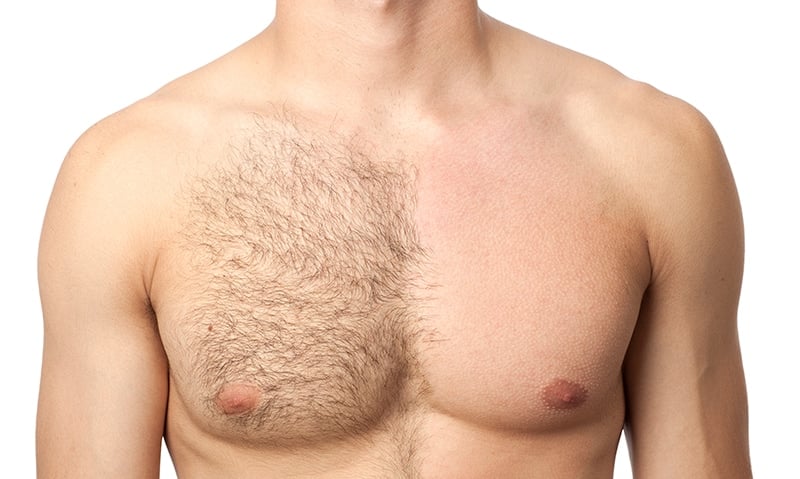 Realistic expectations and cost effectiveness need to be discussed before any treatments are started as long term results vary both between individuals and in different areas of the body. We only have university qualified staff using the latest laser technology as we believe patient safety and optimal results are paramount. We don’t price hair removal cheaply just to get you into the rooms and try and upsell you into more expensive treatments.

A laser machine concentrates an intense beam of light in the root of the hair follicle, heating the hair. When enough heat is produced in the hair root, the follicle is damaged or destroyed, preventing new hair from growing. Laser treatment is performed when the hair follicle is in an active growth phase, as this is when they are most vulnerable to heat. Multiple treatments are needed to target different hairs when they are most susceptible. The time between treatments will vary depending on the area being treated.

Avoid sun that will darken the skin being treated for 2 weeks before. Suntanned skin cannot be treated. Shave the area you are going to treat a day before your appointment and exfoliate the surface thoroughly to ensure there isn’t any residue on the skin, such as fake tan, and avoid using creams or fragranced products.

Use a recommended soothing lotion to calm any redness or discomfort you may experience after the treatment. It may feel like a mild sunburn immediately after treatment and avoid direct sun exposure on the treated area for at least a week after treatment.

Before and after images are presented purely as a reference point of the results that can be achieved. Everyone is unique and outcomes will vary and realistic expectations need to be discussed on a case by case basis.