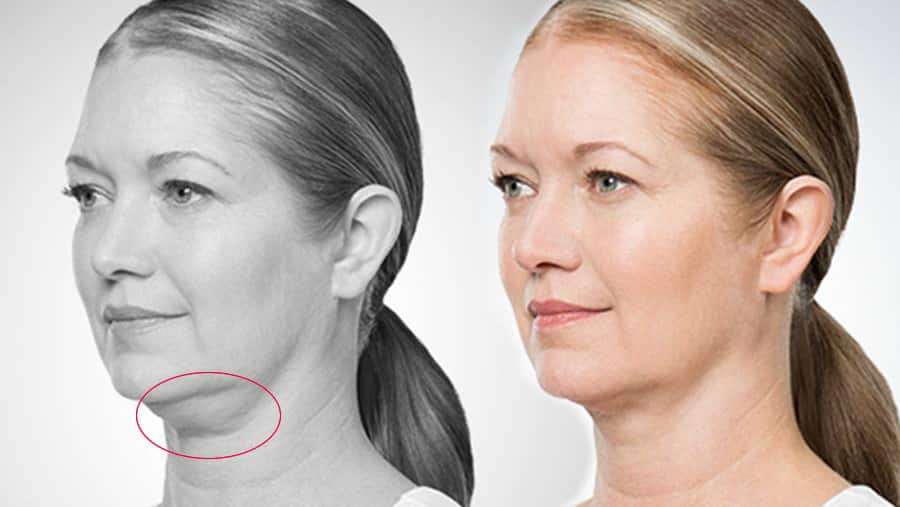 What is a Double Chin?

A Double Chin is the popular term for excess fat under the chin that gives the impression that a person has 2 chins. The medical term is submental fat with sub meaning below and mentum being the anatomical term for the chin.

Are Double Chins a common problem?

Various studies consistently indicate that for many men and women the contour under their chin is a significant cosmetic and social concern. For example, a 2015 consumer survey of 7315 American adults, found 67% somewhat to extremely bothered by excess fat under their chin and neck.

Why do Double Chins develop?

There is an association with weight gain and certainly if people gain a lot of weight they are more likely to develop a double chin. However, other factors are also important, notably genetics and aging. Genetic factors result in the tendency of double chins to run in families and aging is important as double chins typically develop and worsen as people get older and skin and muscle laxity develops.

Why do people want to get rid of their Double Chin?

When we speak to patients about their double chin it is amazing the lengths people go to conceal their double chin. In women the use of scarfs, polo neck tops and even makeup are common strategies whilst in men beards are a common cover up method. Women and men both admit to how they often avoid being in photos or try and control the angle such as looking upwards to try and hide their unwanted double chin.

Studies have demonstrated that successful treatment of a double chin can significantly improve self-esteem in categories such as happiness, less bothered, less self-conscious, less embarrassed, less old, and less overweight.

What are the treatment options?

Effective treatment of a double chin requires the removal of fat. This can be done surgically through liposuction or direct excision (called a Z Plasty because of the surgical incision that is used). Due to the cost, downtime and scarring associated with surgery many non-surgical methods have been tried.

The results with fat dissolving injections have been very impressive and importantly do not require expensive machines. Trials with fat dissolving injections began as long ago as 1988 and there has been progressive refinement in techniques and improvement in results. The product used to treat double chins has been in clinical trials for nearly 10 years with over 20 clinical studies published.

How do fat injections work?

The fat injection product consists of Deoxycholic acid which is a naturally occurring bile salt. In the body bile salts are produced by the liver to help break down fat in the food we eat. When Deoxycholic acid is injected into the area of a double chin, the fat cells are destroyed. The fat cell contents are then cleared by the body’s immune system.

Is the treatment permanent?

We do know the mechanism of action of fat injections is to destroy the fat cell wall and permanently destroy fat cells (a process called adipocytolysis). We also know more fat cells do not develop once people are adults so the treatment is regarded as permanent.

Whilst the treatment has only recently been approved in Australia it has been studied for many years and a 5 year follow up study of 140 patients has shown results are maintained in the long term.

Can everyone have Double Chin injections?

No. Like any skin treatment it should not be performed if there is any active skin infection. Like any elective cosmetic procedure it is not recommended during pregnancy or breast feeding. Caution is advised if someone has a history of swallowing difficulties or past neck operations. If someone has an extremely large Double chin, surgical removal may be a better option. The effectiveness of fat dissolving injections has not been established in patients older than 65 or younger than 18 years old.

What does a Double Chin treatment involve?

The treatment is a walk in walk out procedure performed in the clinic and takes about 15 minutes with a further 15 minutes after treatment with a cold pack. The treatment involves a series of about 10-20 injections under the chin. Patients need a minimum of 2 treatment sessions and sometimes 3 or 4 are required. Whilst patients have had as many as 6 treatments in clinical practice this is rarely needed. The more severe the double chin the more treatments that are needed for the optimal result. Treatments are spaced usually 4-6 weeks apart.

Normal activity can be resumed immediately after treatment but some planning may be needed for social engagements in the week following treatment until any swelling and bruising has resolved. Strenuous exercise can be resumed after 48 hours.

Who does the treatment?

The product used for double chin injections is a prescription only product (called a Schedule 4 drug) and needs to be prescribed by a medical practitioner. The use of injections to treat double chins is a medical procedure and should be performed in a medical clinic by highly trained medical staff.

The needles are not painful as they are very fine gauge but there is often some discomfort after the product is injected that is typically described as feeling like sunburn. This can last for 10-15 minutes afterwards and ice is used to alleviate this. If people have more sensitive skin a simple analgesic 60 minutes before treatment (eg Ibuprofen 600 mg) can be used.

Topical anaesthetic creams and even local anaesthetic injections can also be used but are rarely necessary. It is important to realise that subsequent treatments tend to be less uncomfortable as less tissue needs to be treated and lower doses are used.

What happens after Double chin treatment?

Swelling is to be expected after treatment and this is most severe after the first treatment. Whilst Double chin injections are a walk in walk out lunchtime procedure we recommend not returning to work that day. Because of the expected swelling we also recommend not to plan any important social events for at least 48 hours after a treatment. Most patients find the swelling settles in a few days but it can last 5-7 days.

Bruising is not uncommon and if people are on medications that thin the blood such as Aspirin then bruising is more likely. Some patients notice temporary skin redness, numbness, itchiness and the skin can feel hard for several weeks as the fat is broken down and inflammation occurs.

Can there be any complications with Double chin injections?

Allergic reactions are extremely rare as the Deoxycholic acid used is biologically the same as bile acids that are already naturally present in the body.

Training and careful injection technique is critical to avoid any problems. If the product is injected too superficially it can cause irritation and even ulceration of the skin. Temporary nerve injury has been reported that can cause an uneven smile which although temporary can last for a number of months.

Researchers have developed a special grid that is placed on the skin prior to injection to customise treatments and to enable accurate needle placement. A 5 year follow study of 140 patients after Double chin injections found no permanent side effects and no adverse effects such as loose skin.

How long until improvement is seen?

What is the cost of Double chin injections?

Treatment is provided as a package of 2 treatments at a cost of $2600 (including GST). If further treatments are required after the initial 2 then this is at a cost of $1000 for each subsequent treatment. Medicare provides no rebate, private insurance does not reimburse any cost and the Government will charge GST of 10% on any double chin injection treatments.

When considering the costs of double chin injections it needs to be remembered it is the permanent removal of fat and does not need to be repeated in the future. When the cost is spread over the years of benefit then many feel it is a very worthwhile investment especially when compared to wrinkle injections and dermal fillers which need to be repeated at regular intervals.